Scientists are forever searching for newer, safer medications to relieve pain. This search has become even more fervent as the abuse of opioids has reached epidemic proportions. One drug that resulted from the search for safer pain-relieving medications is Tramadol. This drug has been promoted as a safe, non-addictive pain-relieving medication since it was first introduced. Recently, however, this “safe” medication has been found to be less safe and more addictive than it was previously thought to be. Let’s discuss Tramadol’s history and uses, common misconceptions about it, its health risks, and treatment options for ending its use.

What is Tramadol and How is it Used?

Tramadol is a medication used to treat moderate to moderately severe pain in adults. It comes in tablet or capsule form and is available only by prescription. It’s typically prescribed when other pain relievers have not been effective.

Tramadol is made from a combination of synthetic opioid medication and monoamine reuptake inhibitors (MRI). The opioid works on the opioid centers of the brain while the MRI works by inhibiting the reuptake of both norepinephrine and serotonin. The effect is to relieve pain while offsetting the depressant effect of the opioid with the stimulant MRI.

The drug’s opioid effect is about one-tenth as strong as that of morphine.1Because of this, the drug is not usually effective by itself for the treatment of severe pain or long-term chronic pain. In these instances, Tramadol may be used in combination with other pain relievers.

Brand names in the United States include:

Tramadol was first synthesized in Germany in 1962. As it was a new concept in pain-relieving medication, it was tested for 15 years in that country before being released to foreign markets in 1977. The United States was slow to accept the use of the drug, which was finally approved by the United States Food and Drug Administration (FDA) in 1995. At that time, the drug was not classified as a controlled substance and was considered to be a safe medication.

As the use of Tramadol grew, more and more evidence showed that the drug was being abused. This abuse was not often readily apparent, as it was usually abused in combination with other substances. Since it was the only unregulated opioid on the market, however, the medication was easy to obtain, and its abuse became increasingly common.

The largest misconception about Tramadol is that it is not an opioid and not addictive. This is just not true. The drug contains a synthetic opioid that is metabolized into an opioid in the body and acts on the opioid centers of the brain, just like other opioids. Tramadol’s effect is not as readily apparent as that of stronger opioid medications, but it is still real and significant. Taking the drug, especially at higher doses or for longer periods of time than a physician recommends, can lead to dependence.3 Tramadol is an opioid and is addictive.

Another misconception is that it’s a safer medication than other, stronger opioids. In fact, Tramadol has its own risks for the following reasons:

The dual mechanism of action (MOA), consisting of binding to the opioid receptors in the brain and inhibiting serotonin and norepinephrine reuptake, causes unpredictable rates of metabolism in different people. This can lead to differing rates of effectiveness and toxicity, making predictions about the safety of the drug inaccurate.

The risks associated with the dual MOA include atypical reactions as compared to other opioids, as risks for both opioid medications and Selective Serotonin Reuptake Inhibitors (SSRIs) are incurred when Tramadol is used.4

The most common side effects include:5

The most common side effects include:5

Onset or worsening of sleep apnea 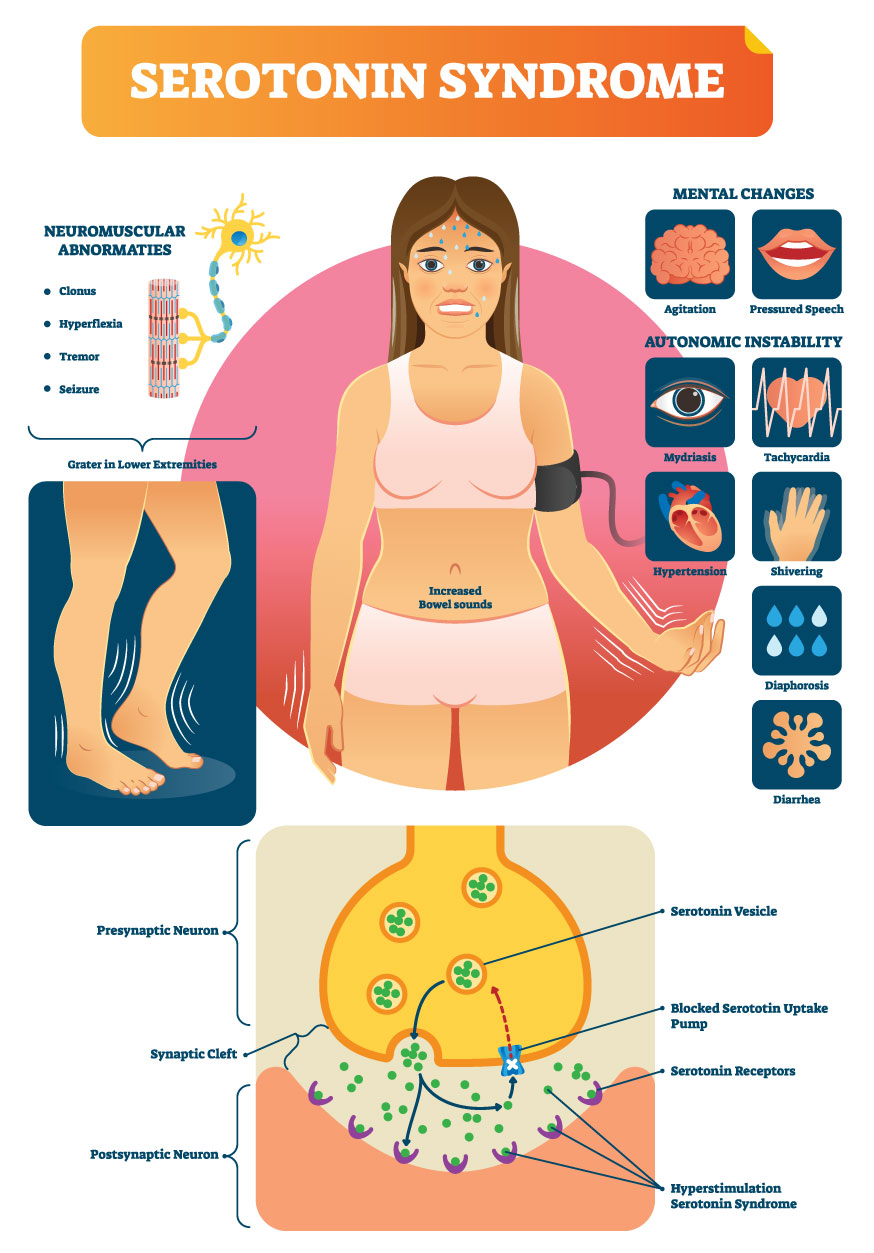 Hypoglycemia (low blood sugar): People who have diabetes and who take Tramadol may experience an abnormal decrease in their blood sugar levels. This can lead to shakiness, weakness, fainting or lightheadedness, anxiety, heart palpitations, and excessive hunger, among other symptoms.

Seizures: People who have never had seizures before may be at increased risk of having seizures while on the drug.

Tramadol toxicity: Tramadol is processed in the liver and excreted from the body through the kidneys. People who have kidney or liver disease may not be able to process and remove the drug from the body as other people do, leading to toxic levels of build up.

Ultra-rapid metabolism: This happens when Tramadol is metabolized in the body too quickly, resulting in stronger side effects, including slowed or stopped breathing. Children are especially prone to this health risk.

Tramadol and Other Drugs

One of the more dangerous risks of Tramadol is its potential to interact with other drugs. These interactions can cause blood levels to contain too much of the drug, leading to adverse side effects or Tramadol toxicity. Interaction may also cause the drug to be ineffective and possibly lead to withdrawal symptoms. Using Tramadol with certain medications can also cause the body’s central nervous system to be overly depressed, leading to slowed or stopped breathing, coma, and death. Some of the drugs that interact adversely with Tramadol include:7

All types of anti-depressants

All drugs that have a risk of causing seizures

Tramadol abuse has increased rapidly over the past several years, in part because of the misconception that Tramadol is a safe medication. The National Survey of Drug Use and Health (NSDUH), sponsored by the Substance Abuse and Mental Health Services Administration (SAMHSA), reports that .5% of adults in the United States misused the drug in 2018. This number accounts for 8.1% of all people who use Tramadol.8

Risk of Overdose and Death

People who abuse Tramadol are at risk for overdose, and possibly also for death, due to the health risks mentioned above. The Centers for Disease Control (CDC) reports that drug overdose deaths involving synthetic opioids, including Tramadol, are on the rise. In fact, the number of deaths due to synthetic opioids other than methadone rose by 45% from 2016 to 2017.9

The number of people who require emergency medical care for Tramadol abuse is concerning. Tramadol is a medication that is often combined with other medications and is often abused along with other substances. The good news is that the trend of people abusing or overdosing on Tramadol appears to be decreasing. The following chart shows the number of exposures to Tramadol reported by the American Association of Poison Control Centers from 2012 to 2018.10 The chart includes the number of case mentions and the number of single exposures reported: 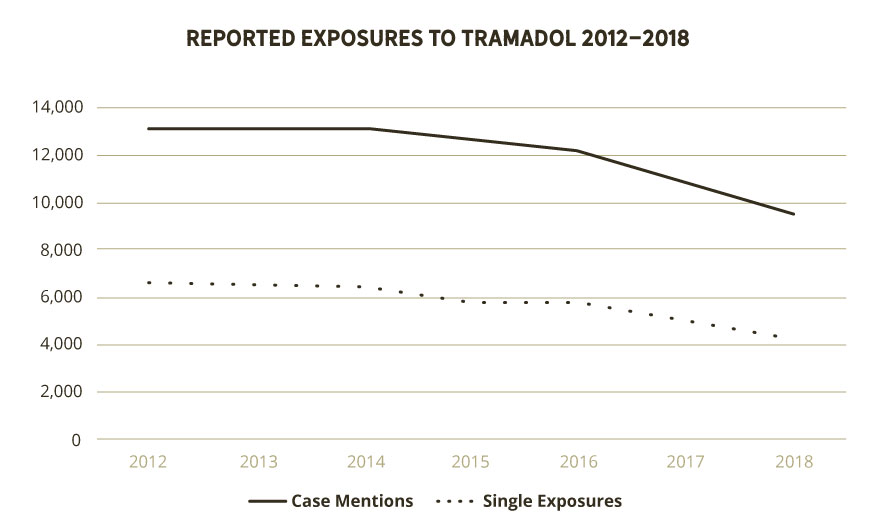 Of note here is the decrease in reported exposures between 2014 and 2018, which may reflect the overall decrease in the use of prescription opioids. The number of deaths reported has also decreased, from 9 in 2012 to 1 in 2018.

Because Tramadol is an opioid, it is addictive, like other opioids. Due to the way it’s manufactured, the drug’s addictive properties may not be as strong as those of other opioids like Oxycodone or Hydrocodone, but they are still there. If use is stopped suddenly, withdrawal symptoms may occur. These include:

That being said, these drugs may be effective when treating dependence on Tramadol. A 2013 case study showed how a woman successfully recovered from Tramadol dependence by using a combination of buprenorphine and naloxone.12

People who need to stop taking Tramadol should not do so “cold turkey.” The symptoms of withdrawal listed above will occur and may last about a week. If these symptoms are severe, a person may require immediate medical care.

A better approach to stopping Tramadol use is to work with a physician or other medical professional to gradually reduce the dose, keeping the symptoms of withdrawal mild or absent until use stops. This is called tapering. There is no set amount of time over which tapering of Tramadol should occur, but the average is 2 to 3 weeks.13 Tapering should be sufficient to end Tramadol use if drug was being taken for pain control under the supervision of a physician, with no other addictive substances involved.

Treatment in a Drug Rehab Facility

People who misuse or abuse Tramadol may need more intensive treatment to end the abuse, especially if the drug is being abused along with other, more potent substances. This type of treatment may be done through outpatient treatment with a qualified physician, or in an inpatient facility if withdrawal symptoms are severe or dangerous.

How Long Does Recovery Take?

The more Tramadol is taken on a regular basis, the more severe the withdrawal symptoms will be, and the longer it will take to end use. If Tramadol has been taken along with dangerous substances like alcohol or other strong opioids, inpatient treatment will be necessary to assist with detoxification, or “detox.”

There are some medications that may help to manage the withdrawal symptoms of Tramadol while tapering off of the drug. Interestingly, some of these medications are flagged as drugs to avoid when taking Tramadol, but they are effective in managing withdrawal symptoms. It’s important to always follow doctor’s prescriptions and take medications exactly as directed. These drugs include:14

Buprenorphine, a synthetic medication that acts on the opioid receptors of the brain, blocking the ability of Tramadol to bind to these receptors.

Methadone, yet another opioid antagonist which binds to the opioid receptors for a longer time at a lower intensity than opioids.

Benzodiazepines, medications that can help to manage the symptoms of withdrawal, especially if the primary symptom of withdrawal is anxiety or restlessness.

Clonidine and Moxonidine, medications that are usually used to control high blood pressure but have been found to be effective in treating opioid withdrawal symptoms.

In addition to medications, psychosocial treatments may be effective in helping address how to manage pain and other factors that led to the abuse of Tramadol.

People who have taken the drug for chronic pain conditions should work with their physicians to manage the symptoms of their pain conditions, which may return when drug use has ended. Those who misused or abused Tramadol may need behavioral treatments to help address the life factors that led to addiction. Some of these treatments may include:

Cognitive Behavioral Therapy – This type of individual counseling helps a person identify incorrect thought processes that lead to drug use, and then to develop alternate thinking patterns that will allow the person to live without the use of drugs.

Marital and Family Counseling – This form of counseling works individually and with family members to repair relationships that were damaged by drug use.

Social Support Groups – Talking about issues surrounding drug use and abuse may be helpful to some people. Groups like Narcotics Anonymous provide a safe place for people recovering from substance abuse to support each other.

Training in Relaxation Techniques – These techniques can help a person ending Tramadol use to deal with the stress and anxiety surrounding pain conditions or other factors that led to drug use.

Tramadol is a drug that is neither safe nor non-addictive. People who need to take the drug for pain control should do so under the supervision of their physicians and should only take it as directed. If you or someone you love is misusing or abusing Tramadol and has developed a physical dependence on the drug, seek help to end the abuse. Find recovery today.

Your Insurance Could Cover Outpatient Treatment

We work with most major insurance providers. Find out if your benefits cover the cost of addiction treatment.
Fill out our online form for quick answers. 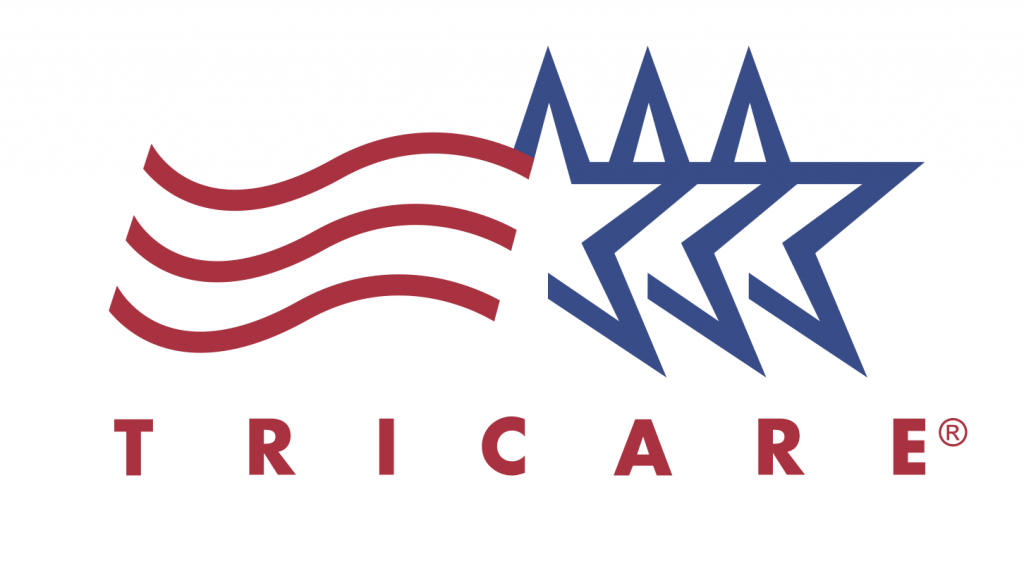 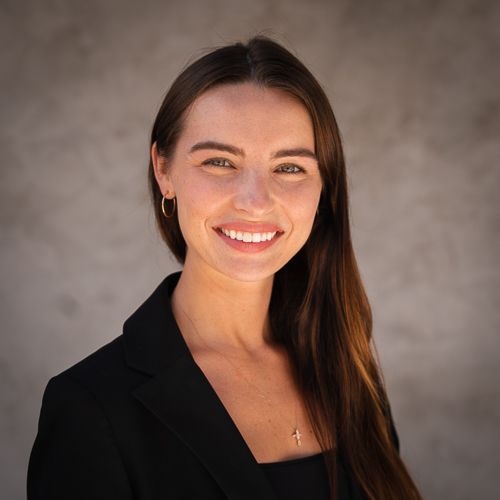 Kelsey carries multiple years of experience working in the substance abuse and mental health treatment field. Her passion for this field comes from her personally knowing recovery from addiction.

Prior to Buckeye she held titles of Recovery Coach, Operations Director, and Admissions Director. Kelsey was brought on at Buckeye Recovery as the Director of Business Development. She has a passion for ensuring every individual gets the help that they need, and does so by developing relationships with other providers.

Kelsey also oversees our women’s sober living environments – The Chadwick House for Women. She is committed to creating a safe, nurturing, and conducive environment for all women that walk through the doors of Chadwick.